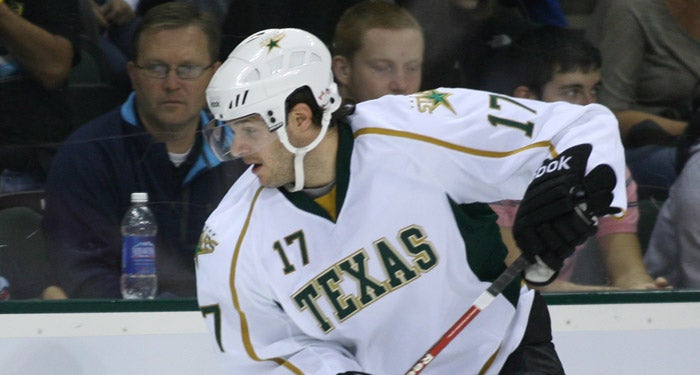 Cedar Park, TX - The Dallas Stars announced on Sunday that the club has recalled right wing Tomas Vincour (Vin-sooer) from the Texas Stars, Dallas’ primary affiliate in the American Hockey League (AHL). He will join the Stars for Monday’s game against the Edmonton Oilers.

Vincour celebrated his 21st birthday with his tenth goal of the season on Saturday against Houston. The right wing leads the Texas Stars with ten goals in 15 games played. In all, he is tied for third on the team with 13 points. He had a five-game goal scoring streak from Oct. 27 – Nov. 6. Vincour’s streak tied Warren Peters’ team record for consecutive games with a goal. Vincour also tied a team record by recording a point in six straight games from Oct. 25 – Nov. 6. He currently has a goal in six straight road games. The 6-foot-3, 205-pounder, scored five goals and totaled 12 points in 44 games as a rookie with Texas in 2010-11.

He made his NHL debut last season with Dallas, registering one goal and one assist in 24 games with the NHL club. The Brno, Czech Republic native was selected by Dallas in the fifth round (129th overall) at the 2009 NHL Entry Draft.

The Stars will host the Chicago Wolves on Wednesday, November 23rd at 7:30 P.M. Wednesday is an HEB Night. Fans may bring any HEB store brand non-perishable food item to receive $5 off the ticket price. The Chicago game is also a Winning Wednesday, if the Stars win, fans will receive a free ticket to the next Winning Wednesday game on January 11th. Texas travels to Houston on Friday, November 25th at 7:35 P.M. and returns home on Saturday, November 26th at 7:00 P.M. to face the Aeros. The first 2,500 fans to Saturday’s game will receive a Texas Stars scarf presented by State Farm. Saturday also features the State Farm Family Four Pack (4 tickets, 4 hot dogs, and 4 sodas for $44).