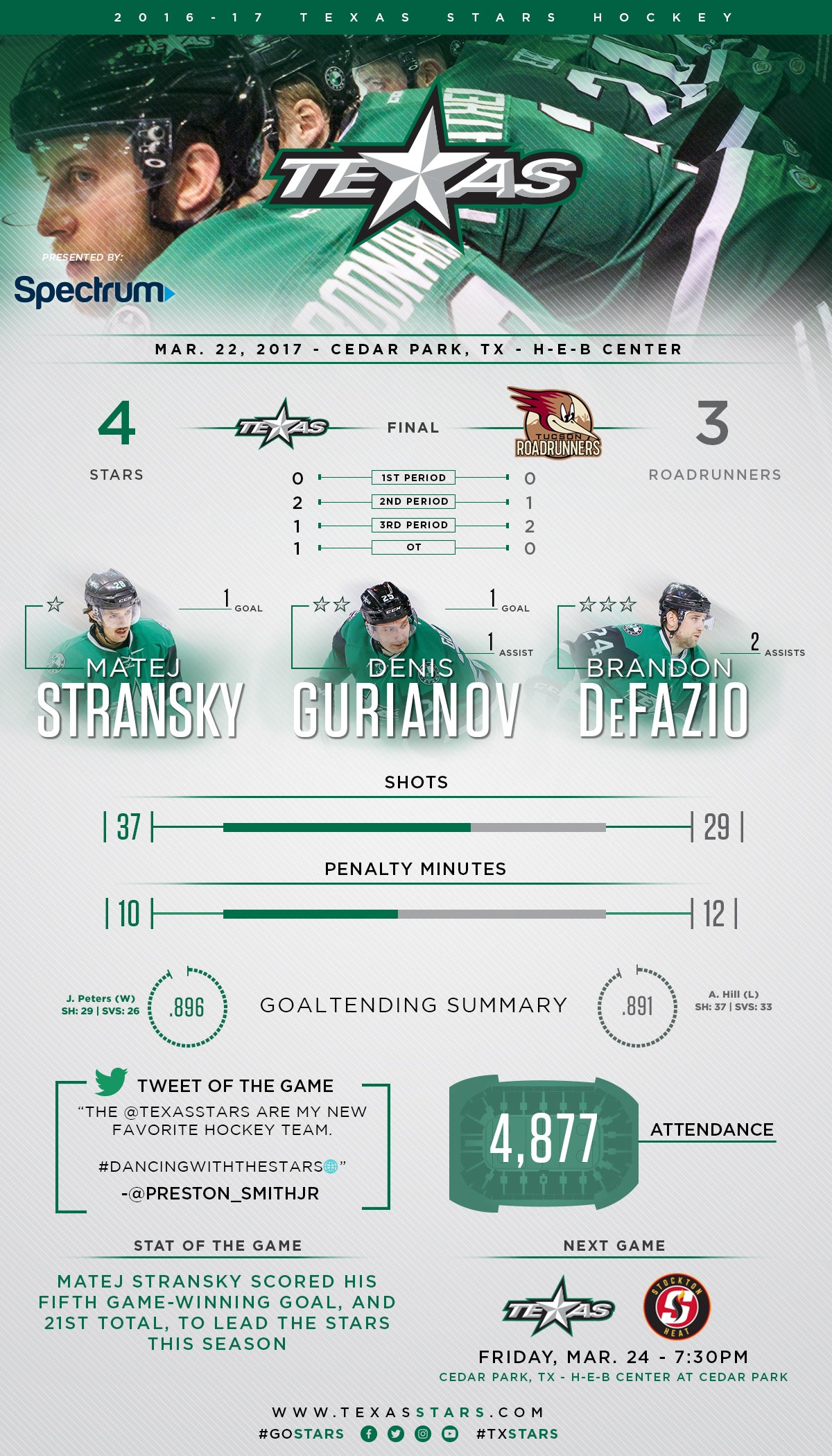 Stransky’s goal, which occurred at the 2:24 mark of 3-on-3 overtime, came after defenseman Nick Ebert drove to the net through the right circle and generated the rebound chance for the Czech-native to bury past Tucson netminder Adin Hill.  With the marker, Stransky added his fifth game-winner and 21st goal of the season to lead the Stars (29-30-1-4) in both categories.

“You live and you learn a little bit,” said Stars forward Brandon DeFazio. “We figured it out quicker than we did the last time in Cleveland. We’d obviously like to make it a little easier on ourselves. As always, we want to find a way to shut that down, but that’s not always the case. It’s better coming out with a win more than anything.”

After a scoreless first period, the offense opened up in the early minutes of the middle frame when forward Ethan Werek earned his ninth of the season to put Texas on the board thanks to Dillon Heatherington's centering feed at the 2:07 mark. Forty-four seconds later, rookies Denis Gurianov and Gavin Bayrether set up a waiting Julius Honka for a one-time blast on the power play to make it 2-0 in favor of the home team.

Tucson (24-27-7-0) responded at 7:09 of the second when forward Tyler Gaudet deflected a shot from the point past Peters to cut the lead in half heading into the final period of action.

To open the third period’s offense, Gurianov extended the Stars’ lead to 3-1 after he tipped the puck past Hill off a Travis Morin crossing feed at 4:09.

Roadrunners forward Joe Whitney found his way past netminder Justin Peters with 7:01 remaining in the third to, once again, make it a one-goal game. Then, Tucson pulled Hill for the extra attacker, which allowed forward Laurent Dauphin to tie the game for the visiting club with 1:31 remaining in regulation.

The Stars return to the ice on Friday night as the club begins a three game series against the Stockton Heat in Cedar Park.

QUICK HITS:
-Texas was 1-for-5 on the power play while the Roadrunners went 0-for-4.
-Justin Peters stopped 26 of 29 shots in net to improve to 3-0 over his former club
-Adin Hill stopped 34 of 38 shots in net for Tucson.
-Brandon DeFazio tallied two assists in the win.
-Travis Morin also earned 2 assists and played in his 700th professional game