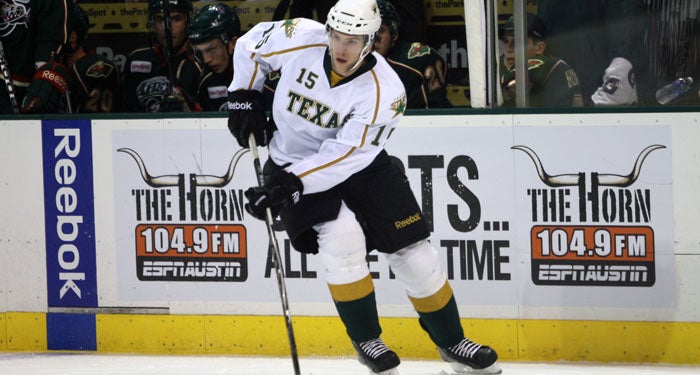 Cedar Park, TX - The Texas Stars announced on Friday that forward Michael Neal has been assigned to the Idaho Steelheads, Texas’ primary affiliate in the ECHL.

Neal was recalled on Monday, but did not see action with the Stars on his recent stint. He is in his third season within the Dallas Stars organization. The Whitby, ON, native has played 22 games with Texas over the previous two seasons. During his time in Texas, the forward has three goals and 14 penalty minutes. The 22-year-old played in 19 games with Idaho this season, totaling three goals and seven points. For his career, Neal has played in 144 pro games with Idaho and Texas, scoring 17 times and totaling 40 points. He was drafted by the Dallas Stars in the fifth round (#149 overall) in the 2007 NHL Entry Draft.

The Stars finish up a two-game road swing in Charlotte on Saturday, December 3rd at 6:00 p.m. Texas returns home on Friday, December 9th to face Charlotte at 7:30 p.m. As part of Sing for Santa local schools will be caroling throughout the evening. Farmers Insurance will present a Texas Stars insulated lunch bag to the first 2,500 fans at the game. Friday is also 3-2-1 night featuring $3 domestic drafts, $2 sodas and $1 hot dogs. The Stars continue Sing for Santa weekend on Saturday, December 10th with the Oklahoma City Barons at 7:00 p.m. at Cedar Park Center. The first 2,500 fans receive a Texas Stars knit cap, compliments of University Federal Credit Union. Also, fans may purchase the State Farm Family Four Pack, which includes four hot dogs, four sodas and four tickets starting at $48.