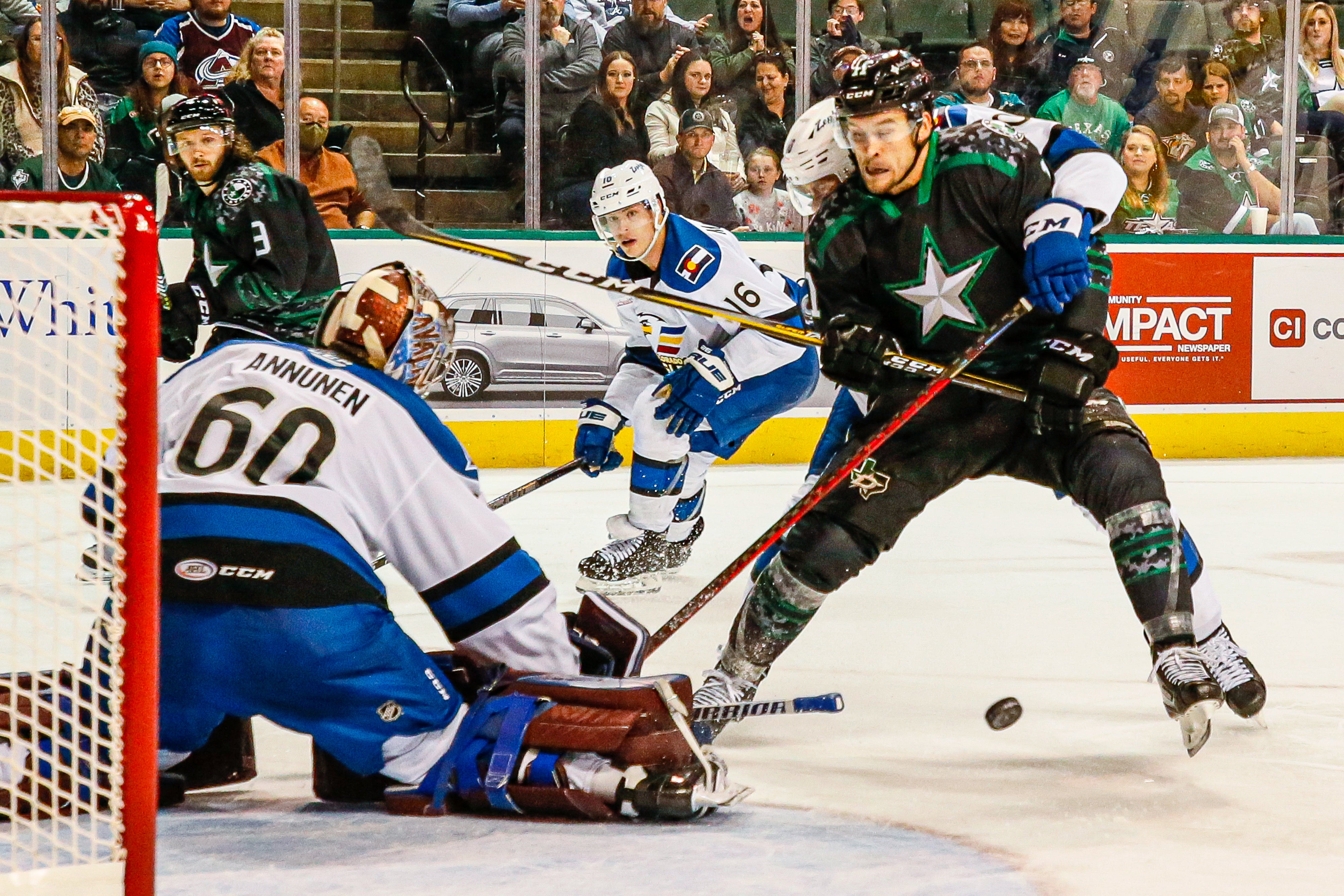 At the start of the first, the Stars opened up the scoring with a goal from Fredrik Karlstrom. Linemate, Oskar Back dug the puck out from behind the net and sent a centering pass to a streaking Karlstrom who tapped it past Justus Annunen. Just two minutes later, Colorado tied it up with a goal from Callahan Burke. At 13:11, Colton Point came out of his crease to play the puck before the Colorado forward, Trey Bradley, could snatch it away. Point passed the puck down the ice to Ty Dellandrea who created a two-on-one with Curtis McKenzie. Dellandrea held his defenders and sauced McKenzie a perfect pass which he knocked in past Annunen. The Stars held the lead 2-1 at the end of the first.

In the second period, the Stars started on the man-advantage. Just 51 seconds into the game, a shot from Riley Damiani near the right circle met the stick of McKenzie who was camped out in front of the net and redirected it into the net to give the Stars the 3-1 lead. The Stars held the lead for nearly all of the second period but at 15:43, Dylan Sikura cut the lead to one with a power play goal of his own. The Colorado power play goal stemmed from a Tanner Kero tripping penalty. At the end of the second, the Stars held a 3-2 lead.

In the third period, Eagles defenseman, Dennis Gilbert, scored just 18 seconds into the frame to tie the score at three. The rest of the third period remained scoreless and for the second night in a row, we went to overtime.

In the overtime frame, the Stars outshot the Eagles 3-1 and both goaltenders stood tall in net.

For the second night in a row, the game was to be decided with a shootout. Texas sent Anthony Louis to the line to shoot first for the Stars. Louis skated towards the net of Annunen, deked left then moved it to his backhand and slid the puck past Annunen. The first shooter for Colorado was Mikhail Maltsev who drove in on Point, and tried to beat him low but Point flashed the pad, denying him. The second shooter for Texas was Kero, who tried to beat Annunen low stick-side but was shut down. Point came up big against Sikura, who shot second for the Eagles. Sikura tried a wrister low but Point used the pad once again to make the stop. Texas’ third shooter was Damiani who drove in with speed and attempted to beat Annunen glove-side but was denied. Colorado sent their last hope to the line in Sampo Ranta who tried to beat Point low stick-side but Point said no, giving the Stars the shootout win.

Point finished the night with 16 saves on 17 shots to pick up his first win of the season in just his second start. Annunen stopped 35 of 38, but it wasn't enough for the Eagles.