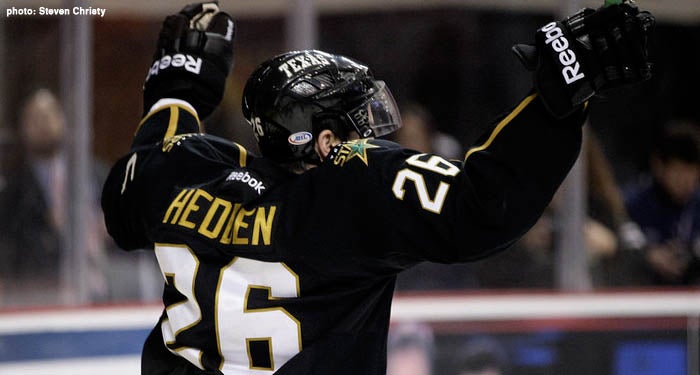 Oklahoma City, OK - The Texas Stars (11-12-0-1, 21 points) defeated the Oklahoma City Barons (19-7-1-1, 39 points) 3-2 in front of 2,393 fans at the Cox Convention Center on Tuesday night. The Stars erupted for three goals in the first period and hung on for a road win against the top team in the AHL. Texas forwards Raymond Sawada, Stephen Schultz and Colton Sceviour each scored, as Texas improved to 7-5-0-0 on the road this season. Texas goalie Tyler Beskorowany (4-6-0) stopped 18 of 20 shots for the win. Oklahoma City goalie David LeNeveu (7-3-1) suffered the loss and was pulled after allowing three goals on 11 shots in the opening period. Yann Danis stopped all remaining 19 Texas shots to hold the Stars off the scoreboard in the final two periods. Barons defenseman Taylor Chorney and winger Ryan Keller netted third-period goals to pull Oklahoma City within a goal. The Stars travel to Houston on Friday, December 16th at 7:35 p.m. to face the Aeros.

The Stars erupted for three goals in the first period of play. The scoring started at 3:23, when Stephen Shultz tipped a point shot from Ondrej Roman. Schultz’s first goal of his pro career was also set up Mike Hedden for the 1-0 Texas lead. Texas made it 2-0 at 9:39 of the opening frame. Defenseman Brenden Dillon rifled a shot to the net from the right point. Stars right wing Raymond Sawada tipped the puck past Barons’ goalie David LeNeveu for the 2-0 Texas lead. Forward Matt Fraser also assisted Sawada’s sixth goal of the season. The Stars rounded out the first period with their third goal of the evening at 17:07. Forward Colton Sceviour snapped a wrist shot under the crossbar of the Barons’ net for his third goal of the year and a 3-0 Stars lead. Rookie Scott Glennie and left wing Francis Wathier set up Sceviour’s 28th all-time goal with Texas. Oklahoma City goalie David LeNeveu was pulled after giving up three goals on 11 shots in the opening period.

After a scoreless second period, Barons defenseman Taylor Chorney put Oklahoma City on the board at 8:31 of the third period. Chorney’s second goal of the season trimmed the Texas lead to 3-1. The Barons pulled within a goal, as Ryan Keller scored at 19:59 for the final score of 3-2.

Texas will travel to Houston on Friday, December 16th for a 7:35 p.m. faceoff with the Aeros. Texas returns home on Saturday, December 17th at 7:00 p.m. to take on the Rochester Americans. The first 3,500 fans to the game will receive a Texas Stars fleece blanket courtesy of H-E-B. Saturday also features the State Farm Family Four Pack, consisting of four tickets, four hot dogs and four sodas for $48. Texas rounds out its weekend with a 3:30 p.m. game in San Antonio.