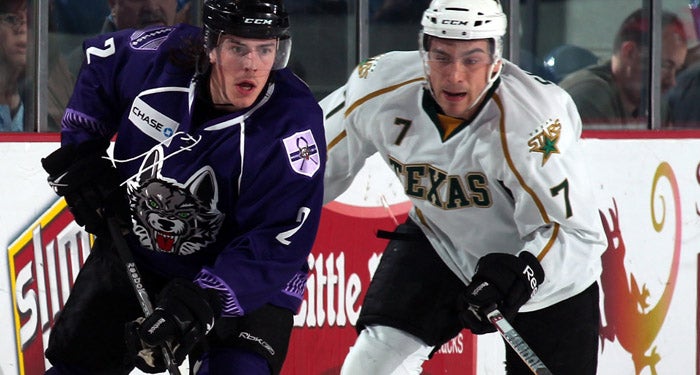 Rosemont, IL - The Texas Stars (18-18-1-2, 39 points) defeated the Chicago Wolves (21-14-1-3, 46 points) 4-3 in front of 3,032 fans at the Allstate Arena on Wednesday. The Stars scored three goals in the second period, including the game-winning goal from defenseman Maxime Fortunus to close out the road trip with a one-goal victory. Jordie Benn and Matt Fraser also added second-period markers, as the Stars improved to 10-11-0-1 on the road this season. Texas Captain Brad Lukowich scored once and added an assist in the victory. Texas goalie Andrew Raycroft (4-2-1) made 23 saves for the win. Rookie Scott Glennie also picked up two assists for the Stars. Chicago goalie Eddie Lack (9-10-3) stopped 25 Texas shots in the defeat. Texas returns home on Friday at 7:30 p.m. to host the Peoria Rivermen.

The two teams traded goals in first period of play. Chicago opened the scoring at 3:06 of the game, Wolves forward Nathan Longpre swung in behind the Texas crease and tucked a wraparound shot into the net for his seventh goal of the season. Tim Miller and Kevin Connauton each had an assist on the game’s first goal, giving Chicago a 1-0 lead. The Stars countered with a power-play goal at 5:27 of the opening frame. Captain Brad Lukowich blasted a slapshot through traffic and into the back of the Chicago net. Lukowich’s fourth of the year was set up by Colton Sceviour and Scott Glennie.

In the second period, the Wolves regained the lead at 2-1. Forward Jordan Schroeder finished off a two-on-one, scoring his tenth goal of the year at 2:45 of the middle frame. Texas countered less than a minute later, defenseman Jordie Benn snapped a wrist shot in from the right point at 3:08. Jake Hauswirth and Brendan Connolly each had an assist on Benn’s eight goal of the year, tying the game 2-2. The Stars pressed on and claimed a 3-2 lead at 13:57 of the second period. All-Star Matt Fraser blasted a one-timer past Eddie Lack, notching his 21st goal of the season. Mike Hedden and Travis Morin each had an assist on the team’s third goal of the night. Texas finished off second-period at 14:54 with a power-play goal by Maxime Fortunus. His fourth of the season was set up by Lukowich and Scott Glennie for a 4-2 Texas lead.

The Wolves picked up a late goal with 1:07 remaining in the third period. Mike Duco scored his ninth goal of the year, trimming the Stars lead to 4-3.