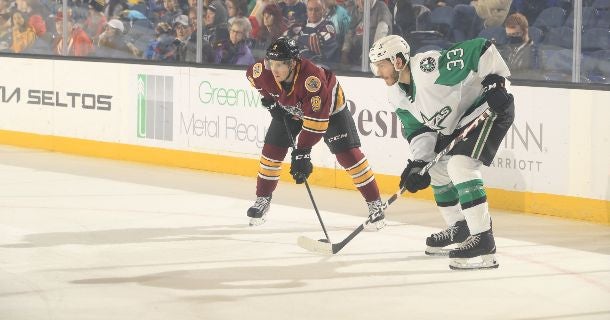 ROSEMONT, IL – The Texas Stars, American Hockey League affiliate of the NHL’s Dallas Stars, scored the first goal for the fifth straight game, but saw their five-game winning streak snapped in a 4-2 loss to the Chicago Wolves Wednesday at Allstate Arena.

Josh Melnick scored a lightning-quick goal just 14 seconds into the game to put the Stars on the board first. The pass came from Curtis McKenzie behind the Wolves net, and Melnick quickly rang the shot off the post and in behind Pyotr Kochetkov.

Chicago answered three minutes later when David Gust snuck in a sharp angle shot behind Adam Scheel to tie the game at 1-1. C.J. Smith put the Wolves in front late in the opening period when he redirected in a point shot from Stefan Noesen into the top of the net.

Late in the middle period, it was Noesen’s tip a shot into the net, as he deflected the puck just below the crossbar past Scheel to make it 3-1. The goal was Noesen’s league-best 39th goal and eventually his league-leading tenth game-winner.

Alex Petrovic kept it close, when he ripped a one-timer from the right circle past Kochetkov with 9:46 remaining in the game to bring the Stars back to within one. But an empty net strike from Smith sealed the Wolves seventh victory in the season series.

Texas returns home to host the Iowa Wild Saturday at 7:00 p.m. and Sunday at 5:00 p.m. at the H-E-B Center at Cedar Park, in the first two games of a five-game homestand.