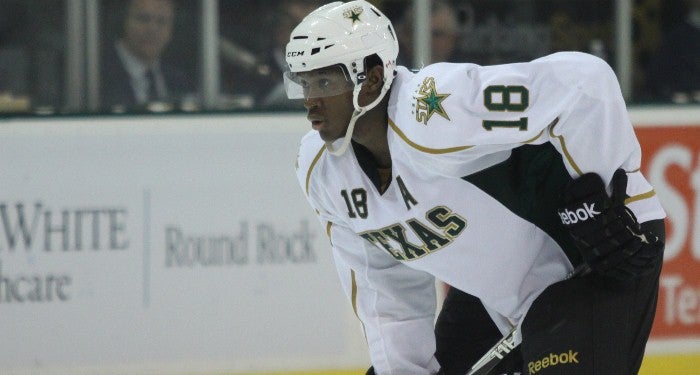 Cedar Park, TX – The Texas Stars traded wins with the Charlotte Checkers last week, starting with a 3-2 loss on Wednesday at the Time Warner Cable Arena. On Saturday night, the Stars countered with a 4-2 decision over the Checkers, ending their five-game winning streak.

Game Recaps
Texas 2 at Charlotte 3 11/30/11
The Texas Stars were defeated by the Charlotte Checkers 3-2 in front of 3,839 fans at Time Warner Cable Arena on Wednesday night. Checkers forward Jon Matsumoto scored near the halfway point of the game and the team held on for its fifth straight win. Charlotte goalie Mike Murphy stopped 25 of the 27 Texas shots, including all 13 in the final period of play. Forwards Zac Dalpe and Brett Sutter also scored for Charlotte. Texas defenseman Jordie Benn and left wing Luke Gazdic each scored in the loss. Texas goalie Tyler Beskorowany stopped 21 of 24 shots in the defeat.

Stars Superlatives
Forwards Travis Morin, Raymond Sawada and Matt Fraser lead Texas in scoring through the team’s first 21 games of the season. Morin is the clubhouse leader with 16 assists and 20 points in 21 games played. He ranks in the top ten of the AHL for assists and he is among the AHL leaders with ten power-play helpers. He has an assist in four straight road games. Sawada is tied for second overall in team scoring with five goals and ten assists for 15 points in 21 games played. Rookie forward Matt Fraser is tied for second with 15 points in 21 games. He leads the team with ten goals scored and 85 shots on net. Fraser is among the AHL leaders with seven power-play goals.

Rookie forward Scott Glennie had a three-game scoring streak snapped last Wednesday in Charlotte. He has six points in his last six games. Left wing Luke Gazdic has a goal in consecutive games, giving him six for the season.

Jordie Benn leads all Texas defensemen in scoring with seven goals and 14 points in 21 games played. He ranks tied for first in goals scored and tied for seventh in points among all AHL defensemen. Benn has a point in five straight games and he has at least a point in eight of the last nine games.

Tickets
Individual tickets for all games are on sale now. Tickets are available online at www.TexasStarsHockey.com or by calling 512.GO.STARS (467.8277). Tickets may also be purchased at the Cedar Park Center box office.