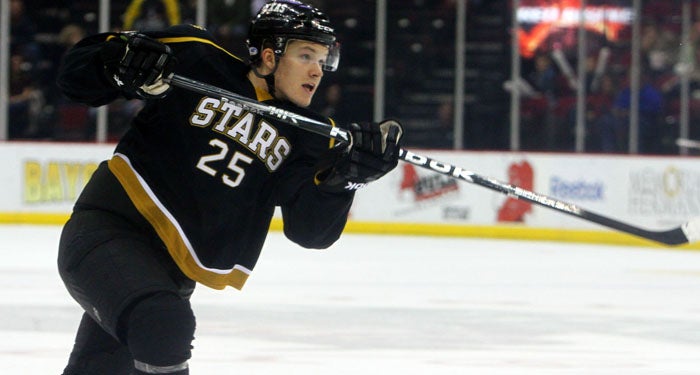 Stars Hang On For 3-2 Win In Houston

Houston, TX - The Texas Stars (13-14-0-1, 27 points) defeated the Houston Aeros (16-6-2-7, 28 points) 3-2 in front of 5,741 fans at the Toyota Center on Wednesday. Stars forward Ryan Garbutt scored twice over a 1:08 span of the second period, erasing a one-goal deficit and pushing Texas to victory. Stars goalie Tyler Beskorowany (5-8-0) turned aside 27 Houston shots, including nine in the third period, giving the club its third win at Toyota Center this season. Defenseman Hubert Labrie also added a goal for Texas, as the team improved to 8-7-0-0 on the road this year. Houston goalie Matt Hackett (10-5-3) suffered the loss with 22 saves. The Stars return home on Tuesday to host San Antonio at 7:3 p.m. at Cedar Park Center.

Houston scored the lone goal of the first period at 7:58 of the opening frame. Aeros defenseman Jeff Penner fired a puck wide of the Texas net from the blueline. Center Chad Rau picked up the loosed puck and shuffled it into the Stars net, beating goalie Tyler Beskorwany for his sixth goal of the season and a 1-0 Houston lead.

In the second period, Texas countered to tie the game 1-1 at 8:31. Defenseman Hubert Labrie blasted a shot from the point, beating Matt Hackett for the Stars first game of the night. Forward Matt Fraser extended scoring streak to eight games with an assist on the goal. The Aeros countered with a shorthanded goal at 16:06 of the second period. Cody Almond picked off a pass and scored his fourth goal of the year off a breakaway for a 2-1 Houston lead. The Stars netted two goals in a 1:08 span to take the lead prior to the end of the period. Just 54 seconds after the Aeros moved in front, forward Ryan Garbutt redirected a puck past Hackett to tie the game 2-2. Garbutt scored his fifth of the year off a cross-ice feed from Mike Hedden, as Ondrej Roman also added an assist on the play at 17:00. Garbutt added his second goal of the night at 18:08, giving the Stars a 3-2 lead. Garbutt’s sixth goal of the year came off a rebound of a Colton Sceviour shot. Defenseman Maxime Fortunus added an assist on the team’s third goal of the night.

Texas returns home on Tuesday, December 27th for a 7:30 p.m. faceoff against San Antonio. Tuesday is an HEB night. Fans are encouraged to bring any HEB non-perishable food item to the game and receive $5 off their ticket price. The Stars will then head to Abbotsford for a pair of games on December 29 and 30.