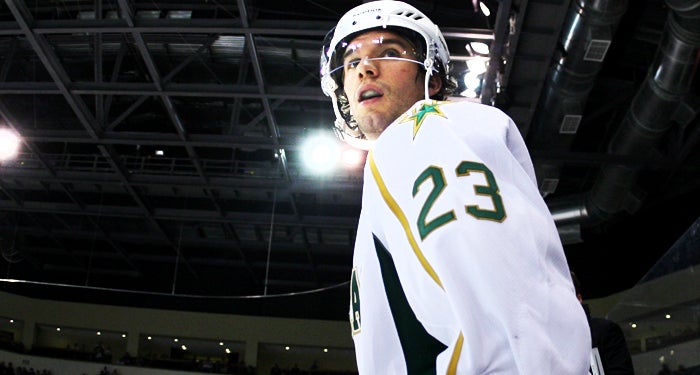 Houston, TX - The Texas Stars (7-7-0-1, 15 points) defeated the Houston Aeros (9-3-1-3, 22 points) 3-2 in overtime in front of 9,036 fans at the Toyota Center on Friday night. Texas right wing Raymond Sawada put in a rebound 1:30 into overtime, scoring his fifth goal of the year and lifting the Stars to a road victory over their in-state rivals. Center Travis Morin and defenseman Maxime Fortunus each had two assists, as the Stars improved to 4-4-0-0 on the road this season. Forward Tomas Vincour and defenseman Jordie Benn also scored, as Texas took home its third overtime win of the season. Vincour extended his goal scoring streak to seven straight road games this season. Texas goalie Richard Bachman (6-4-1) picked up the win with 21 saves. Houston goalie Matt Hackett (7-2-2) made 32 saves in the defeat. The Stars will return home this Saturday to host the Aeros at 7:00 p.m. at Cedar Park Center.

Texas claimed a 1-0 lead at 11:03 of the opening frame with a power-play goal by Jordie Benn. Maxime Fortunus and Travis Morin each picked up an assist on the game’s opening goal. Benn redirected a Morin centering pass for his fourth goal of the season and a 1-0 Stars lead.

Houston countered in the opening minute of the second period. Center Chad Rau found a puck in the left-wing circle of the Texas zone and snapped in his first goal of the season. Houston’s first goal of the night came just fifty seconds into the middle frame, tying the game 1-1.

The Aeros pushed in front just 34 seconds into the third period, claiming their first lead of the night at 2-1. Center Jeff Taffe scored his fifth goal of the season after sending a shot off a Stars defender and into the Texas net. The Stars tied the game 2-2 at 13:40 of the third period. Francis Wathier found Vincour inside the Houston zone. The Stars winger ripped a slapshot past Matt Hackett for his ninth goal of the year, also assisted by Fortunus. The goal extended Vincour’s streak to seven straight road games with a goal.

The two teams skated to overtime tied at 2-2. The Stars worked the puck to the Aeros net, as Travis Morin fired a shot from the right-wing circle. Hackett made the initial save, but the rebound trickled out to his right at 1:30 of overtime. Texas right wing Raymond Sawada shuffled a backhand shot into the Aeros net for his fifth goal of the year and a 3-2 Texas win.