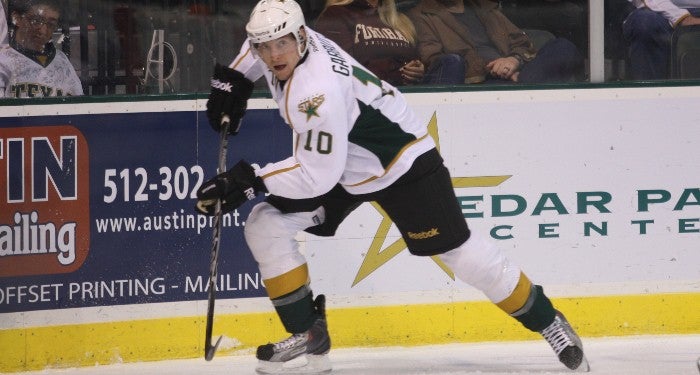 Cedar Park, TX – The Texas Stars started the week with a 3-2 win at Oklahoma City on Tuesday night. Texas followed up with a 4-1 defeat in Houston on Friday night. The Stars returned home to blast Rochester 6-2 at Cedar Park Center on Saturday night. Texas rounded out its weekend with a 4-2 loss in San Antonio on Sunday.

This Week’s Games
The Stars travel to Houston on Wednesday, December 21st to take on the Aeros at 7:05 p.m. Texas returns home on Tuesday, December 27th for a 7:30 p.m. faceoff against San Antonio. Tuesday is an H-E-B night. Fans are encouraged to bring any HEB non-perishable food item to the game and receive $5 off their ticket price.

Game Recaps
Texas 3 at Oklahoma City 2 12/13/11
The Texas Stars defeated the Oklahoma City Barons 3-2 in front of 2,393 fans at the Cox Convention Center on Tuesday night. The Stars erupted for three goals in the first period and hung on for a road win against the top team in the AHL. Texas forwards Raymond Sawada, Stephen Schultz and Colton Sceviour each scored. Texas goalie Tyler Beskorowany stopped 18 of 20 shots for the win. Texas 1 at Houston 4 12/16/11
The Texas Stars were defeated by the Houston Aeros 4-1 in front of 10,240 fans at the Toyota Center on Friday night. Goalie Matt Hackett stopped 29 of 30 Texas shots, including 16 in the second period, pushing Houston past Texas. Aeros Joel Broda, Matt Kassian, Chay Genoway and Chad Rau each scored, as Houston improved to 4-0-2-0 against Texas this season. Rookie Matt Fraser extended his scoring streak to five games with the lone Texas goal.

Texas 2 at San Antonio 4 12/18/11
The Texas Stars were defeated by the San Antonio Rampage 4-2 in front of 5,339 fans at AT&T Center on Sunday. Forward Bill Thomas led San Antonio to its third win over Texas, scoring twice and setting up one other for three points. San Antonio goalie Jacob Markstrom stopped 45 of 47 Stars shots, including 35 in the last two periods combined. Stars rookie forward Matt Fraser extended his points streak to seven games, scoring his team-leading 14th goal of the year. Forward Ondrej Roman also scored, as Texas fell to 7-7-0-0 on the road this season. Texas goalie Tyler Beskorowany stopped 29 shots in the defeat.

Tickets
Individual tickets for all games are on sale now. Tickets are available online at www.TexasStarsHockey.com or by calling 512.GO.STARS (467.8277). Tickets may also be purchased at the Cedar Park Center box office.