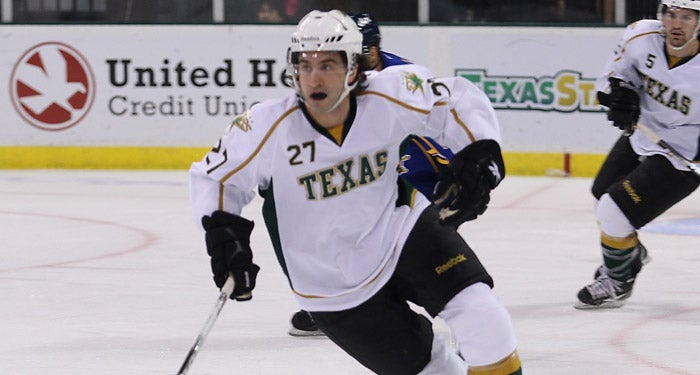 Cedar Park, TX - The Texas Stars (19-18-1-2, 41 points) defeated the Peoria Rivermen (20-18-2-1, 43 points) 6-2 in front of 5,273 fans at Cedar Park Center on Friday night. Five Texas skaters had multi-point nights, led by winger Matt Fraser’s four assists. Forward Stephen Schultz notched two goals and left wing Mike Hedden put up a goal and an assist, as the Stars powered past the Rivermen behind a three-goal second period. Center Travis Morin and defenseman Jordie Benn each added two assists, as the Stars improved to 9-7-1-1 at home this season. Texas goalie Andrew Raycroft (5-2-1) stopped 21 of 23 shots as the team claimed its sixth win in the last eight home games. Rivermen defenseman Cade Fairchild and right wing Jonathan Cheechoo each scored in the loss. Peoria goalie Ben Bishop (17-11-0) stopped 29 of 35 shots as the Rivermen slipped to10-10-1-1 on the road. The Stars face the Houston Aeros on Saturday, January 21st at 7:00 p.m. at Cedar Park Center.


Texas scored the lone goal of the first period at 10:16, as defenseman Maxime Fortunus scored his fifth goal of the season. Wingers Mike Hedden and Matt Fraser set up the game’s opening goal, giving Texas a 1-0 lead.


The Stars continued the scoring in the second period with an early power-play goal from forward Stephen Schultz at 1:33. Defenseman Jordie Benn and left wing Matt Fraser each assisted on Schultz’s fifth goal of the year and a 2-0 lead. Peoria responded at 4:06 as defenseman Cade Fairchild fired a shot through traffic to beat Raycroft and cut the Texas lead to 2-1. Left wing Brett Sterling and right wing Adam Cracknell set up the goal. The Rivermen quickly tied the game 2-2 at 4:40 as right wing Jonathan Cheechoo slipped in a rebound for his 11th goal of the year. Forwards Anthony Nigro and T.J. Hensick each provided an assist on the team’s second goal of the night. Texas charged back to take the lead with a pair of goals prior to the end of the period. Texas claimed a 3-2 lead at 12:47 of the period, as left wing Mike Hedden ripped a shot from the right circle for his fifth tally of the year. Fraser and Travis Morin set up the club’s third goal of the night. The Stars pushed their lead further with a goal from center Scott Glennie with 2:16 remaining. Right wing Colton Sceviour and left wing Francis Wathier each assisted on the play, closing the second period 4-2.


Texas extended its lead to 5-2 as Stephen Schultz registered his second goal of the night. Morin and Fraser each added an assist on the power-play goal at 9:24 of the third period. The Stars struck again with 1:05 left in the period. Center Ryan Garbutt scored a shorthanded goal with help from defensemen Brenden Dillon and Jordie Benn. The late third-period goal lifted the Stars past Peoria 6-2.