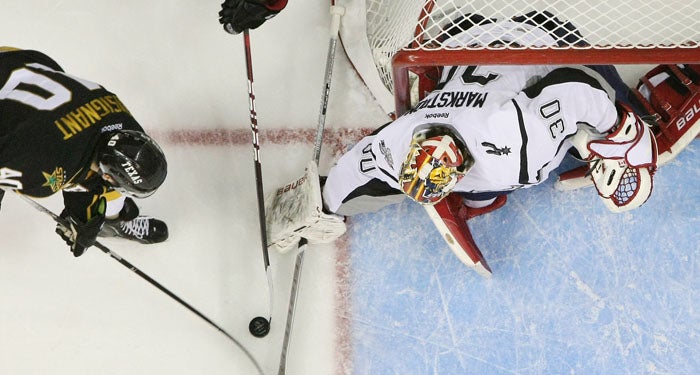 San Antonio, TX - The Texas Stars (12-14-0-1, 25 points) were defeated by the San Antonio Rampage (14-14-0-0, 28 points) 4-2 in front of 5,339 fans at AT&T Center on Sunday. Forward Bill Thomas led San Antonio to its third win over Texas, scoring twice and setting up one other for three points. San Antonio goalie Jacob Markstrom (5-5-0) stopped 45 of 47 Stars shots, including 35 in the last two periods combined. San Antonio center Mark Cullen scored once and set up two other goals, helping the Rampage earn its fourth straight win. Defenseman Colby Robak totaled three assists, as San Antonio improved to 3-1-0-0 against the Stars this season. Stars rookie forward Matt Fraser extended his points streak to seven games, scoring his team-leading 14th goal of the year. Forward Ondrej Roman also scored, as Texas fell to 7-7-0-0 on the road this season. Texas goalie Tyler Beskorowany (4-8-0) stopped 29 shots in the defeat. The Stars travel to Houston on Wednesday to take on the Aeros at 7:35 p.m.

The Rampage jumped out to an early 1-0 lead, scoring the game’s opening goal just 3:11 into the first period. Center Mark Cullen found Bill Thomas in the Texas crease for a redirected shot that slipped past Stars goalie Tyler Beskorowany. Thomas’ eighth goal of the year was also assisted by defenseman Colby Robak. San Antonio extended its lead to 2-0 at 14:16. Thomas centered a pass from behind the Texas net to Bracken Kearns, who scored his team-leading 10th goal of the year. Defenseman Tyson Strachan also had an assist on the play, helping the Rampage take a 2-0 lead into the first intermission.

The Stars trimmed the Rampage lead to 2-1 at 6:20 of the middle period. Forward Ondrej Roman picked off a pass in the San Antonio zone and snapped a shot past Jacob Markstrom. Roman’s first goal of the season was unassisted. San Antonio countered less than a minute later. Bill Thomas tipped a point shot by Colby Robak, scoring his second goal of the night at 7:16 of the second period. Mark Cullen added an assist on the play that gave the Rampage a 3-1 lead.

In the third period, Texas pulled within a goal at 3-2 after Matt Fraser scored his team-leading 14th goal of the season. Center Travis Morin extended his streak to six straight road games with an assist on the play. Defenseman Maxime Fortunus also had an assist on the play at 10:56 of the third period. The Rampage sealed the win at 19:23, as center Mark Cullen scored his third goal of the year for the 4-2 final.

The Stars travel to Houston on Wednesday, December 21st to take on the Aeros at 7:05 p.m. Texas returns home on Tuesday, December 27th for a 7:30 p.m. faceoff against San Antonio. Tuesday is an HEB night. Fans are encouraged to bring any HEB non-perishable food item to the game and receive $5 off their ticket price.