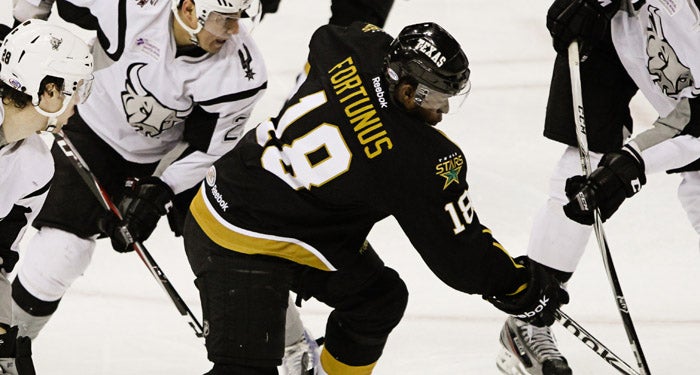 Texas to Play in Oklahoma City at 7:00 P.M. Saturday

San Antonio, TX - The Texas Stars (20-19-1-2, 43 points) were defeated by the San Antonio Rampage (23-18-2-0, 48 points) 6-2 in front of 7,869 fans at AT&T Center on Friday night. San Antonio scored three goals in the first period and went on to end the Stars three-game winning streak. Six different Rampage skaters registered a multi-point night, as the team won its sixth straight game. Rampage goalie Dov Grumet-Morris (12-5-0) stopped 23 of 25 for the win. Stars forwards Angelo Esposito and Tomas Vincour each scored in the loss, as the team fell to 10-12-0-1 on the road this season. Texas goalie Andrew Raycroft (6-3-1) took the loss, stopping 15 of 20 shots in 47:22 of play. Tyler Beskorowany finished the game in net for Texas, stopping five of six. The Stars face visit Oklahoma City on Saturday, January 28th at 7:00 p.m. at the Cox Convention Center.

San Antonio jumped out in front of Texas with a three-goal first period. The scoring started when right wing Greg Rallo netted his tenth goal of the season, giving the Rampage a 1-0 lead. James Wright and Scott Timmons helped set up the game’s opening goal. San Antonio scored twice in the final two minutes of the first frame. Timmons tipped a point shot by defenseman Michael Caruso, giving the Rampage a 2-0 lead with his seventh goal of the season at 18:09. San Antonio extended its lead to 3-0 with five seconds remaining in the opening period. Forward Jonathan Matsumoto found Michal Repik for a one-timer in the high slot. Repik’s fourth goal of the season beat Texas goalie Andrew Raycroft to finish the first-period scoring.

The Stars cut into the Rampage lead at 4:08 of the second period. Center Angelo Esposito picked off a pass in the San Antonio zone and set up Tomas Vincour for the team’s first goal of the night. The goal extended Vincour’s streak to seven straight road games with a goal. His 11th tally of the year trimmed the Rampage lead to 3-1. San Antonio regained its three-goal lead at 7:19. Forward Jonathan Matsumoto finished off a centering pass from Michal Repik, scoring his 17th goal of the year and extending the team’s lead to 4-1. Texas answered back at 17:47 of the period to cut the Rampage lead to 4-2. Defenseman Dan Spang found Ryan Garbutt in the right-wing circle for a one-timer. Garbutt’s shot was tipped in front by Esposito, his first goal as a Texas Star to make it a two-goal game.

Texas will travel to Oklahoma City on Saturday, January 28th at 7:00 p.m. After the All-Star break, Texas will wrap up a three-game road swing in Houston on Thursday, February 2nd. The Stars will host Charlotte at 7:00 p.m. at Cedar Park Center on Saturday, February 4th. The first 2,500 fans will receive a Texas Stars Player Magnet, compliments of Time Warner Cable. The State Farm Family Four Pack will be available for the Saturday game, with four tickets, four hot dogs and four sodas starting as low as $48.