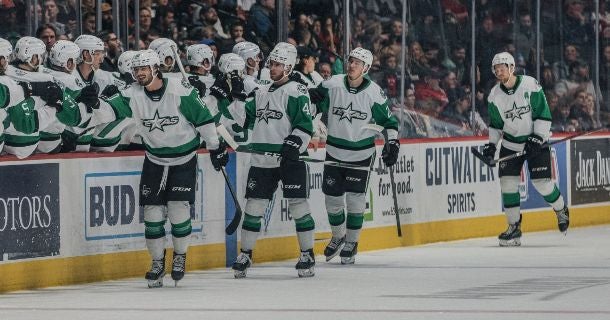 GRAND RAPIDS, MI – The Texas Stars, American Hockey League affiliate of the NHL’s Dallas Stars, moved solely into the fifth and final Central Division playoff position with 12 games to play after a 2-1 win Friday against the Grand Rapids Griffins at Van Andel Arena. Rookie defenseman Michael Karow notched two points in his professional debut, including the game-winning goal for Texas.

Neither team managed to muster up a goal in the opening period, as Grand Rapids held a slight 8-5 edge in shots on goal. Adam Scheel was the busier of the two goaltenders, stopping all eight Griffins shots he faced.

Nick Caamano opened the scoring for the Stars with 6:53 left in the middle frame as he centered a pass from the side of the Griffins net that banked off of Griffins goaltender Victor Brattstrom and into the net. Texas outshot Grand Rapids 9-5 in the frame and led 1-0 after 40 minutes.

The Griffins tied the game at 1-1, when Riley Barber skated into the slot uncontested and ripped a shot past Scheel just 4:56 into the third period. Then Karow, who assisted on Caamano’s earlier goal, put Texas back in front for good when he scored his first professional goal on a point shot that made it through a screen. Scheel stopped 24 of 25 shots to earn his tenth win of the season.

The Stars and Griffins face-off one last time Saturday at 7:00 p.m. at Van Andel Arena, before Texas travels to Chicago for a 3:00 p.m. matinee Sunday against the Wolves at Allstate Arena.