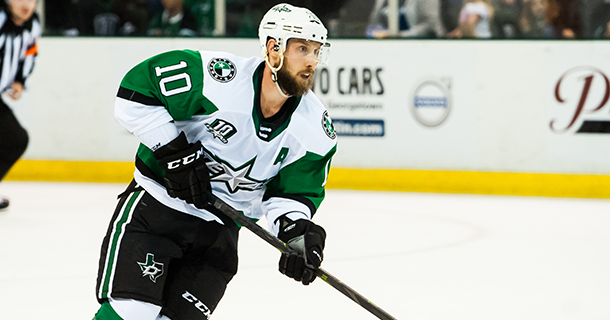 CEDAR PARK, Texas – The Texas Stars, American Hockey League affiliate of the NHL’s Dallas Stars, announced today that forward Justin Dowling has been named the sixth captain in franchise history. Dowling is joined by Travis Morin and Erik Condra as alternate captains of the Stars for the remainder of this season.

Dowling, 28, is in his seventh season with the Texas Stars organization and eighth pro season overall. He ranks third in franchise history with 352 games played. The Cochrane, Alberta native also ranks second on the Stars historically with 253 points (87-166=253).

“Justin’s captaincy is well deserved.  He has been a key part of this organization for the last seven seasons and embodies the Stars organization through the strong leadership, character and work ethic he demonstrates both on and off the ice,” said Texas Stars General Manager Scott White. “In addition to Justin, we have a high-quality leadership group on the team this year with Travis, Erik, and our other veterans. They will all play a large role in guiding our group and helping our young players develop.”

After playing a full season with the Texas Stars in 2013-14, Dowling helped Texas capture the 2014 Calder Cup tallying 14 points (4-10=14) in 14 games. The undrafted prospect then signed his first NHL contract with the Dallas Stars on March 26th, 2014. He later made his NHL debut on October 25, 2016 and tallied an assist for his first career point in a 3-2 win over the Winnipeg Jets. To date, Dowling has played 15 games in the NHL, earning three assists in those contests.