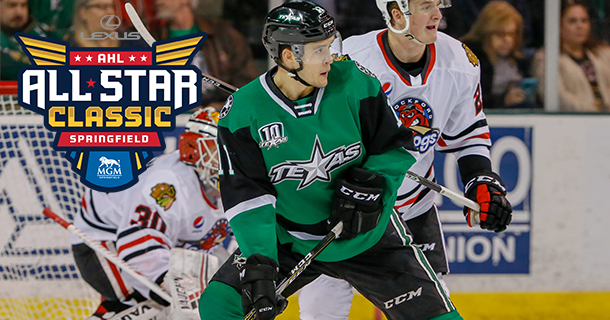 L’Esperance ranks first among AHL rookies and second overall with 22 goals for the Stars this season. Shaw has 26 points in 32 AHL games this season, including 21 points in 25 games with the Moose. Grosenick ranks third in the league with a .921 save percentage and eighth with a 2.46 goals-against average in 22 appearances for the Admirals. Poturalski is currently tied for third in the AHL in scoring with 42 points (17g, 25a) in 42 games for the Checkers.

A limited number of tickets for the 2019 Lexus AHL All-Star Classic presented by MGM Springfield are still available at springfieldthunderbirds.com/allstar. Priced at $39, $49, $59 and $99, tickets include admission to both the Skills Competition on Jan. 27 (7 p.m.) and the All-Star Challenge on Jan. 28 (7 p.m.).

The All-Star Classic also includes the AHL Hall of Fame Induction and Awards Ceremony, to be held at MGM Springfield on Jan. 28 (11 a.m.). The ceremony will feature the induction of John Anderson, Don Cherry, Murray Eaves and Brad Smyth as the AHL Hall of Fame Class of 2019, and will celebrate the careers of honorary All-Star Classic captains Shawn Thornton and Rob Murray.

In operation since 1936, the American Hockey League serves as the top development league for the players, coaches, managers, executives, broadcasters and staff of all 31 National Hockey League teams. More than 87 percent of today’s NHL players are American Hockey League graduates, and more than 100 honored members of the Hockey Hall of Fame spent time in the AHL in their careers. In 2017-18, over 6 million fans attended AHL regular-season and playoff games across North America for the 17th year in a row.