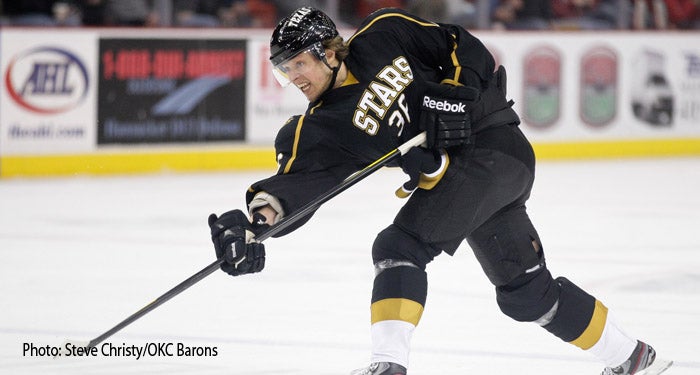 Oklahoma City, OK - The Texas Stars (20-20-1-2, 43 points) were defeated by the Oklahoma City Barons (29-11-2-3, 63 points) 3-1 in front of 5,606 fans at the Cox Convention Center on Saturday night. Barons’ goalie David LeNeveu (11-5-2) stopped 22 of 23 for the win. Texas goalie Andrew Raycroft (6-4-1) stopped a season-high 42 of 44 Oklahoma City shots in the loss. Oklahoma City scored early in the second period and early in the third period to push pas Texas. Barons’ forwards Ryan Keller and Hunter Trembley each scored, as did defenseman Dylan Yeo. The Barons head into the All-Star break with more wins and points than any other team in the AHL. Texas left wing Francis Wathier netted the lone goal in the Stars defeat. The Stars visit Houston on Thursday, February 2nd at 7:35 p.m. at the Toyota Center.

After a scoreless first period, the Barons opened the scoring at 1:39 of the second period with a power-play goal. Defenseman Dylan Yeo blasted a shot from the point, as Texas goalie Andrew Raycroft made the initial save. The rebound rolled in behind Raycroft for Yeo’s fifth goal of the season and a 1-0 Oklahoma City lead.

Oklahoma City doubled its lead just 36-secopnds into the third period. Leading scorer Ryan Keller fired a wrist shot from the bottom of the left-wing circle, his 15th goal of the year slipped off the pads of Raycroft and into the Texas net for a 2-0 Barons lead. Texas cut the Barons lead in half at 2-1, as Francis Wathier snapped his ninth goal of year over the glove of David Leneveu. Tomas Vincour and Brenden Connolly each had an assist on the play. Oklahoma City’s Hunter Tremblay scored and empty-net goal with 13 seconds remaining for the 3-1 final score.

After the All-Star break, Texas will wrap up a three-game road swing in Houston on Thursday, February 2nd at 7:35 p.m. The Stars will host Charlotte at 7:00 p.m. at Cedar Park Center on Saturday, February 4th. The first 2,500 fans will receive a Texas Stars Player Magnet, compliments of Time Warner Cable. The State Farm Family Four Pack will be available for the Saturday game, with four tickets, four hot dogs and four sodas starting as low as $48.