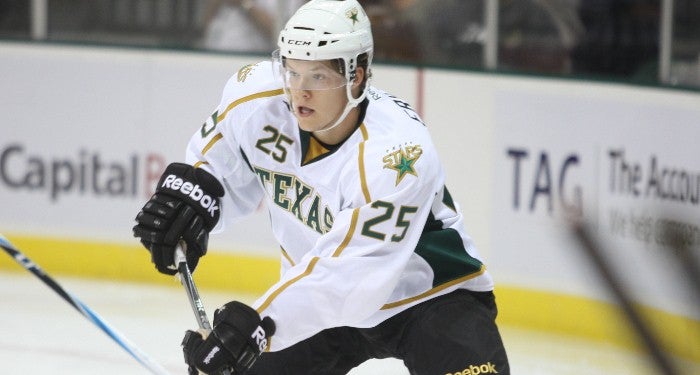 Cedar Park, TX - The Dallas Stars announced on Sunday that the club has placed Jamie Benn on injured reserve retroactive to Jan. 14. The team also announced that it has recalled forward Matt Fraser from the Texas Stars, Dallas’ primary affiliate in the American Hockey League (AHL).

Fraser, 21, is looking to skate in his first career NHL game. In 40 games for Texas this season, Fraser ranks second on the team in scoring with 35 points (21g, 14a). He leads the club with 21 goals and is tied for third overall in that category in the AHL. The 6-2, 207-pound forward was signed to a three-year entry-level contract by Dallas on Nov. 17, 2010.

Benn, 22, has missed the last four contests recovering from appendectomy surgery. The 6-2, 205-pound forward leads the team with 29 assists and ranks second in overall scoring with 42 points (13g, 29a). Earlier this month, Benn was selected to participate in the 2012 NHL All-Star Game in Ottawa.

Texas will travel to San Antonio on Friday, January 27th at 7:00 p.m. and to Oklahoma City on Saturday, January 28th at 7:00 p.m. before the All-Star break. Texas will wrap up a three-game road swing in Houston on Thursday, February 2nd, prior to returning home. The Stars will host Charlotte at 7:00 p.m. at Cedar Park Center on Saturday, February 4th. The first 2,500 fans will receive a Texas Stars Player Magnet, compliments of Time Warner Cable. The State Farm Family Four Pack will be available for the Saturday game, with four tickets, four hot dogs and four sodas starting as low as $48.