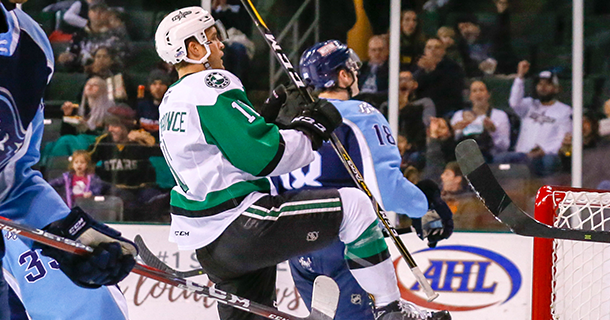 L'Esperance, 23, has recorded three shots on goal and an average of 12:39 time on ice in four NHL games with Dallas in 2018-19. The center shares first in the AHL with 29 goals and 13 power play goals so far in 2018-19. He also leads Texas and shares third among all AHL rookies with 44 points (29-15=44) in 50 games this season, while he paces League rookies and is tied for eighth among all AHL skaters with a team-leading five game-winning goals.

The 6-foot-2, 210-pound native of Brighton, Mich. was originally undrafted and signed with Dallas as a free agent on July 1, 2018.

The Texas Stars are the primary development affiliate of the NHL’s Dallas Stars, and return to H-E-B Center at Cedar Park for three games in four nights, starting with the Milwaukee Admirals on Wednesday night.