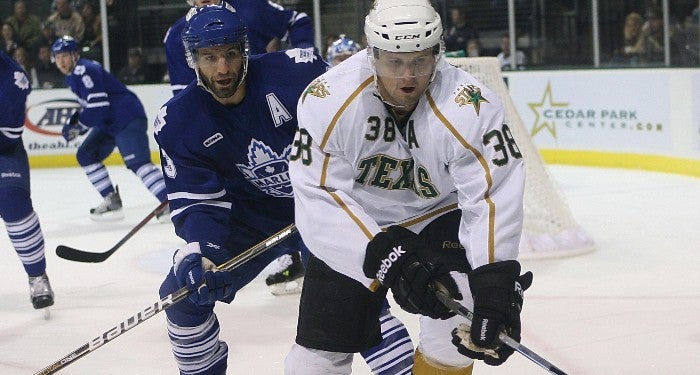 Dallas Assigns Wathier Back to Texas

Cedar Park, TX - The Dallas Stars announced on Tuesday that the club has activated Tomas Vincour from injured reserve and assigned Francis Wathier to the Texas Stars, Dallas’ primary affiliate in the American Hockey League (AHL).

Vincour, 21, has missed the last 14 games with a lower body injury after being placed on injured reserve retroactive to Dallas’ game on Dec. 15 against the New York Islanders. The 6-2, 204-pound forward has skated in 14 games for Dallas this season, recording one goal and two assists for three points. He has been an even or plus player in 11 contests for the Stars so far this year.

Wathier, 27, went scoreless in his lone game with Dallas registering three hits in 5:25 of ice time. He leads the Texas Stars (AHL) with a +10 rating in 37 games, accumulating eight goals and 15 assists for 23 points.

Texas concludes a four-game road trip in Chicago on Wednesday at 7:00 p.m. The team will return home on Friday, January 20th to host Peoria at 7:30 p.m. The first 2,500 fans to Friday’s game will receive a player magnet courtesy of Time Warner Cable. Friday is also 3-2-1 night presented by Community Impact featuring $3 domestic drafts, $2 sodas and $1 hot dogs. The Stars take on the Houston Aeros at home on Saturday, January 21st at 7:00 p.m. The first 2,500 fans to Saturday’s game will receive a player card set compliments of Goodwill. Saturday is also a State Farm Family Four Pack night consisting of four tickets, four sodas and four hot dogs starting at $48.