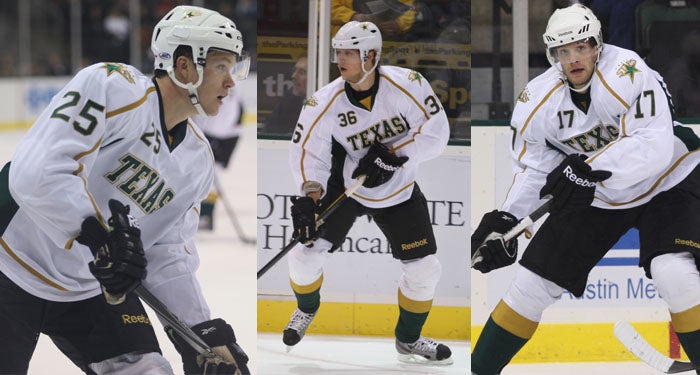 Vincour, 21, has skated in 18 games for Dallas this season, earning one goal and two assists totaling three points. The Brno, CZE native has been an even or plus player in 14 of his contests this season. Vincour played in 15 games for Texas earlier in the season, scoring 10 goals and totaling 13 points. The second-year pro was drafted in the fifth round (#129 overall) by Dallas in 2009.

Larsen, 22, has skated in 21 games for Dallas this season, scoring one goal and two assists in that span. The Esbjerg, DNK native ranks second among Dallas defensemen with a +7 rating and is averaging 17:10 of time-on-ice per game. Earlier this season, Larsen became the first Danish-born defenseman to score an NHL goal since Poul Popiel in the 1971-72 season for the Vancouver Canucks. The young defenseman played in 10 games for Texas earlier in the season, setting up nine goals and racking up ten points. Dallas drafted Larsen with the 149th pick (fifth round) of the 2008 NHL Entry Draft.

Benn, 22, has missed the last five games recovering from appendectomy surgery. The 6-2, 205-pound forward leads the team with 29 assists and ranks second overall in scoring with 42 points (13g, 29a). Earlier this month, Benn was selected to participate in the 2012 NHL All-Star Game in Ottawa.

Texas will travel to San Antonio on Friday, January 27th at 7:00 p.m. and to Oklahoma City on Saturday, January 28th at 7:00 p.m. before the All-Star break. Texas will wrap up a three-game road swing in Houston on Thursday, February 2nd, prior to returning home. The Stars will host Charlotte at 7:00 p.m. at Cedar Park Center on Saturday, February 4th. The first 2,500 fans will receive a Texas Stars Player Magnet, compliments of Time Warner Cable. The State Farm Family Four Pack will be available for the Saturday game, with four tickets, four hot dogs and four sodas starting as low as $48.