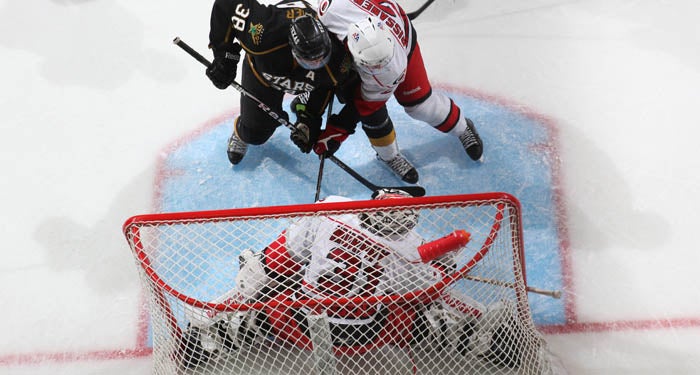 Charlotte, NC - The Texas Stars (8-11-0-1, 17 points) were defeated by the Charlotte Checkers (14-6-1-1, 30 points) 3-2 in front of 3,839 fans at Time Warner Cable Arena on Wednesday night. Checkers forward Jon Matsumoto scored near the halfway point of the game and the team held on for its fifth straight win. Charlotte goalie Mike Murphy (8-5-0) stopped 25 of the 27 Texas shots, including all 13 in the final period of play. Forwards Zac Dalpe and Brett Sutter also scored, as the Checkers improved to 8-1-0-1 at home this season. Texas defenseman Jordie Benn scored his seventh goal of the season, taking over the top spot in the AHL for goals by a defenseman. Left wing Luke Gazdic also scored, as Texas dropped to 5-5-0-0 on the road this season. Texas goalie Tyler Beskorowany (1-5-0) stopped 21 of 24 shots in the defeat. The Stars remain in Charlotte to meet the Checkers again on Saturday, December 3rd at 6:00 p.m. (CT).

The two teams traded goals in the first period of play, with the Checkers getting on the scoreboard first. Charlotte’s Zac Dalpe slipped a backhand shot past Texas goalie Tyler Beskorowany just 4:23 into the game for his third goal of the year. Goalie Mike Murphy and center Chris Terry each had an assist on the play, as the Checkers moved in front 1-0. Texas countered at 10:19, tying the game 1-1 after Jordie Benn scored his seventh goal of the season. Benn put in a rebound off a Travis Morin shot, becoming the top goal-scoring defenseman in the AHL. The Stars moved ahead of Charlotte at 12:10, as Luke Gazdic found his fifth goal of the season. Forwards Ryan Garbutt and Mathieu Tousignant set up Gazdic in the Charlotte crease for the team’s second goal of the period and a 2-1 lead. The Checkers answered back prior to the end of the period, tying the game 2-2 at 17:32. Center Brett Sutter scored off a wraparound, slipping in a backhand for his third goal of the year.

The Checkers moved in front 3-2 at 11:24 of the second period after Jon Matsumoto tallied his ninth goal of the year. Michal Jordan and Zach Boychuk set up the team’s third goal of night, sending the Checkers to their locker room with a one-goal lead.

The Stars finish up a two-game road swing in Charlotte on Saturday, December 3rd at 6:00 P.M. Texas returns home on Friday, December 9th to face Charlotte at 7:30 P.M. As part of Sing for Santa local schools will be caroling throughout the evening. Farmers Insurance will present a Texas Stars insulated lunch bag to the first 2,500 fans at the game. Friday is also 3-2-1 night featuring $3 domestic drafts, $2 sodas and $1 hot dogs. The Stars continue Sing for Santa weekend on Saturday, December 10th with the Oklahoma City Barons at 7:00 p.m. at Cedar Park Center. The first 2,500 fans receive a Texas Stars knit Cap, compliments of University Federal Credit Union. Also, fans may purchase the State Farm Family Four Pack, which includes four hot dogs, four sodas and four tickets starting at $48.