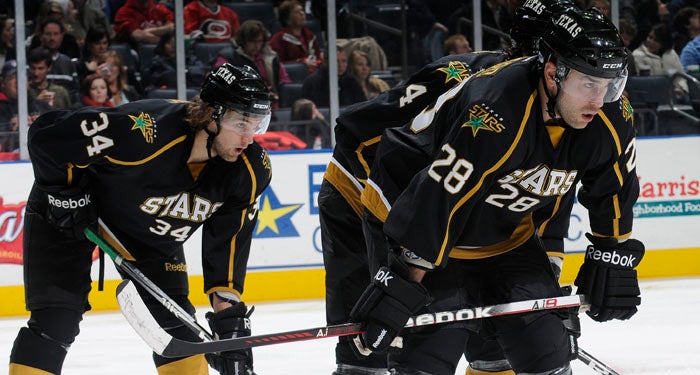 Charlotte, NC - The Texas Stars (9-11-0-1, 19 points) defeated the Charlotte Checkers (14-7-1-1, 30 points) 4-2 in front of 8,913 fans at Time Warner Cable Arena on Saturday night. Four different goal scorers propelled the Stars to a two-goal victory in Charlotte, ending the Checkers five-game winning streak. Stars forward Mike Hedden scored with four seconds remaining in the second period for the eventual game-winning goal. Forwards Matt Fraser and Luke Gazdic also tallied goals, as the Stars handed Charlotte its second loss in regulation at home this season. Texas defenseman Maxime Fortunus scored his third goal of the year early in the third period to ensure the victory, as the team improved to 6-5-0-0 on the road this season. Texas goalie Tyler Beskorowany (2-5-0) stopped 22 of 24 shots in the defeat. Texas defenseman Jordie Benn extended his scoring streak to six straight games with a point, setting up a second-period goal. Charlotte goalie Justin Peters (6-3-1) stopped 25 of the 29 Texas shots, in the loss. The Stars return home to host the Checkers on Friday, December 9th at 7:30 p.m.

Texas opened the scoring at 16:49 of the first period with a shorthanded goal. Stars forward Ryan Garbutt carried the puck through center and deep into the Charlotte zone. Garbutt tossed the puck to the Charlotte slot for Luke Gazdic. The Texas winger snapped a shot past Checkers goalie Justin Peters for his sixth goal of the season for the 1-0 lead. Charlotte countered to tie the game less than a minute later at 17:46. Checkers center Brett Sutter fired a puck through traffic from the left-wing wall in the Stars zone, beating Texas goalie Tyler Beskorowany. Sutter’s fourth goal of the season tied the game 1-1.

In the second period, the Checkers moved in front of Texas with a shorthanded goal by Drayson Bowman at 4:30. Bowman beat Texas goalie Tyler Beskorowany with a backhand shot for his seventh goal of the season and a 2-1 Charlotte lead. The Stars countered with a pair of power-play goals five minutes apart. The Stars tied the game 2-2 after Scott Glennie found Matt Fraser in the right-wing circle for a one-timer at 14:44. Fraser’s tenth goal of the year was also set up by Jordie Benn. Texas claimed its first lead of the night at 19:56 with the second power-play goal of the night. Travis Morin set up Mike Hedden for a one-timer from the left-wing circle. Hedden’s second goal of the year was also assisted by Brenden Dillon with four seconds remaining in the middle frame.

In the third period, Texas forward Matt Fraser received a pass at center and raced into the Charlotte zone. Fraser found Fortunus in the slot alone and he buried his third goal of the season with a wrist shot at 6:30. Mathieu Tousignant also added an assist for the 4-2 final score.