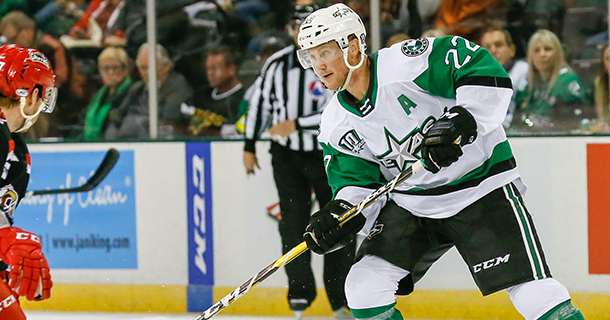 SPRINGFIELD, Massachusetts – The American Hockey League announced today that Texas Stars forward Erik Condra has been selected as the CCM/AHL Player of the Week for the period ending December 2, 2018.

Condra extended his scoring streak to eight games by totaling four goals and four assists in three outings during the Stars’ weekend road trip through the Midwest.

On Friday night, Condra opened the scoring in Milwaukee and later chipped in an assist as Texas defeated the Admirals, 4-1. On Saturday, he scored another goal in the Stars’ 6-3 loss at Grand Rapids. And on Sunday evening, Condra set a career high with five points (two goals, three assists) to spark Texas to a 7-4 victory at Chicago, earning first-star honors in the contest.

With 10 goals and 11 assists in his last 12 games, Condra has climbed into a tie for third place in the AHL’s scoring race with 26 points (11 goals, 15 assists) in 21 games overall this season. The 10th-year pro from Trenton, Mich., has skated in 259 career AHL contests with Texas, Syracuse and Binghamton, totaling 63 goals and 121 assists for 184 points and winning a Calder Cup championship in 2011. Condra was originally selected by Ottawa in the 2006 NHL Draft and has collected 39 goals and 59 assists for 98 points in 366 NHL games with Ottawa and Tampa Bay. He signed as a free agent with Dallas on July 1, 2018.

In recognition of being named the CCM/AHL Player of the Week, Condra will be presented with an etched crystal award prior to an upcoming Stars home game.

The Texas Stars are the primary development affiliate of the NHL’s Dallas Stars, return to the H-E-B Center on Wednesday, Dec. 5 at 7:00 p.m. to face Milwaukee on H-E-B Food Drive Night.