The Stars have teamed up with fans and corporate partners to purchase almost 1,000 tickets in support of current and former members of the armed forces. Tickets purchased have been given to local service members, veterans, and their families to show appreciation for their sacrifice to our country. The Stars would like to recognize the following corporate partners and ticket holders for their support. 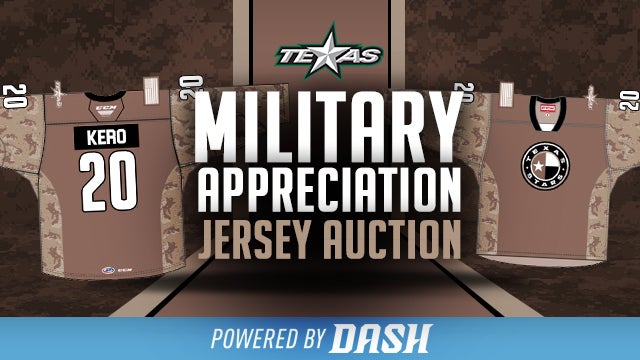 The Stars will be wearing special camouflage jerseys during the game. Those jerseys will be auctioned online through the Texas Stars Mobile App and DASH Auction. The auction opens at 2 p.m. on Saturday and closes at 9 p.m. After the game, the winner of each jersey will be invited to receive their purchased game-worn jersey from the player and get it autographed. For more information about the auction and to begin placing bids, head to TexasStars.com/foundation/jersey-auctions.

Fans can also purchase military-themed autographed Mystery Pucks, as well as, Texas Stars Challenge Coins for a $20 donation at the Foundation table during the game.

The game also features a Stars Boonie Hat giveaway, courtesy of Re-Bath of Austin. Arrive early for the game to get yours before the Stars face the Colorado Eagles at 7 p.m. It is also a Texas Lottery Lucky Row Night and a Coca-Cola Zero Sugar Family Four Pack Night.