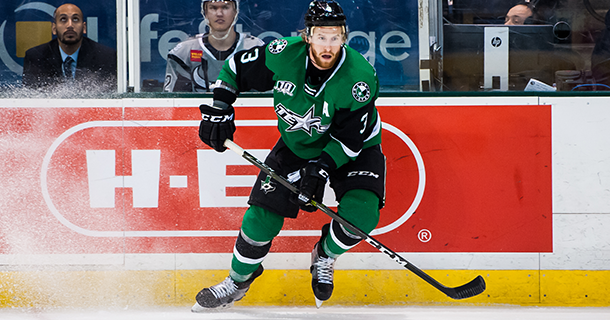 Heatherington, 24, skated in five NHL regular-season games for the Dallas Stars during the 2018-19 campaign and collected one assist (0-1=1). He made his Stanley Cup Playoffs debut in Game 5 of the 2019 Western Conference Second Round vs. St. Louis, recording one hit and one blocked shot in 7:56 time on ice. The blueliner also appeared in 73 regular-season games for the Texas Stars, Dallas' top development affiliate in the American Hockey League (AHL), tallying 24 points (2-22=24). Heatherington ranked second on the team with 75 penalty minutes and shared third with a +8 plus/minus rating.

The blueliner has appeared in 11 career NHL contests, all with Dallas, and has recorded two assists (0-2=2) with a +7 rating and 26 penalty minutes. Heatherington has registered 75 points (11-64=75) in 254 career AHL regular-season contests over parts of six seasons with Texas, Cleveland and Springfield. He has made two appearances in the Calder Cup Playoffs, skating in 36 postseason contests and posting six assists (0-6=6).

The 6-foot-4, 215-pound native of Calgary, Alberta was originally selected by Columbus in the second round (50th overall) of the 2013 NHL Draft. Heatherington was acquired via trade from Columbus in exchange for left wing Lauri Korpikoski on Oct. 10, 2016.