You may not have seen Ringo during a Stars game at H-E-B Center, but he’s certainly seen you. 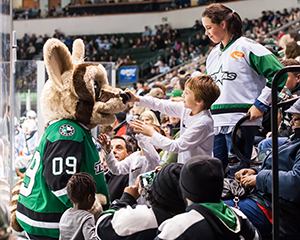 The Ringtail Cat is a native creature to Central Texas known for its superb sight, hearing and ability to climb throughout its habitat. Because of their nature as shy, nocturnal creatures, Ringo made his home in the rafters of H-E-B Center eight years ago and has enjoyed watching every exciting moment of Stars hockey along the way.

Ringtail Cats prefer to live near bodies of water, but in Ringo’s case, a sheet of ice suited him well. His agile movement as a Ringtail Cat allows him to feast regularly on birds, especially Roadrunners, Condors and Gulls. After witnessing two trips to the Calder Cup Finals, a Calder Cup Championship and countless exciting moments since the team’s inception, on December 30, 2017, Ringo finally decided it was time to join the players and fans at ice level after being adopted as the newest member of the Stars.

For more intriguing facts about Ringtails click on the Ringtail Facts below.