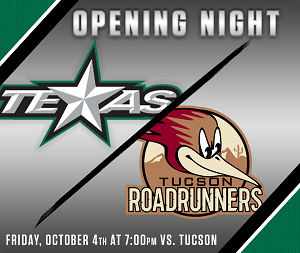 Texas is set to begin the year at H-E-B Center at Cedar Park on Friday, Oct. 4 at 7 p.m. as they welcome the Tucson Roadrunners to town. The Stars will begin their 11th season in Cedar Park and have also announced five other guaranteed dates for the upcoming season.

Single game tickets for the Stars home opener will be offered at a later date. Full-season, 24-game and 12-game packages are available now for the upcoming season by visiting TexasStars.com/tickets/ or by calling (512) GO-STARS (467-8277).

The Stars will compete in the AHL’s Central Division for the second consecutive season, hosting 38 games on home ice and playing a complete 76 game schedule in the 2019-20 regular season.