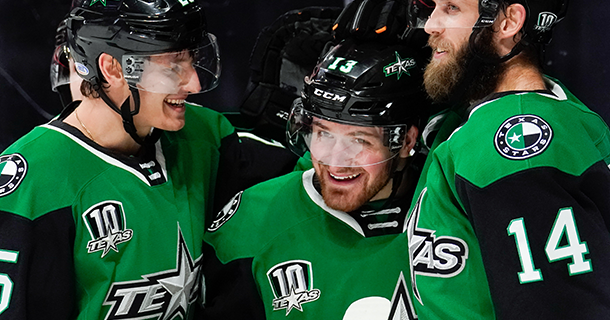 The rookie tallied the opening goal of his three, less than four minutes into the first period with a power play goal. His early goal was his first of four points in the contest and helped Texas to a perfect 3-for-3 performance on the power play. Three minutes later the Rampage answered to tie the game as Jordan Kyrou was led on a partial breakaway.

Mascherin’s stellar night continued with a goal at 12:52 as Nicholas Caamano and Ondrej Vala earned assists on the play. Less than four minutes later, he completed the hat trick with a power play goal. The final goal came from the side of the net as the Stars forward jammed in the rebound. With the 3-1 lead, Texas skated into the intermission with confidence ready to jump into the second period.

Denis Gurianov set a career record in the game with four points and scored a goal in the second period to extend the Stars lead. The winger pot the rebound chance off Robbie Payne’s initial shot toward the net for his team leading eighth goal of the season.

The Rampage managed to get another moments later as Jordan Nolan turned a 2-on-1 up the ice into a tally on the scoreboard. His shot tucked just inside the post to put San Antonio back at a two goal deficit.

What ensued in the final six minutes of the period were three consecutive goals scored by the Stars. Elgin Pearce tallied his first goal of the year followed by Brady Norrish netting his first career goal off a beautiful pass by Gurianov. The final rebound tally scored by Joel L’Esperance pushed goaltender Jordan Binnington to the breaking point. The netminder exited the net and wildly swung his stick at the knees of L’Esperance, causing a brawl on the ice. He was given a game misconduct as Ville Husso entered the game for the final 21 minutes in the game.

The Rampage net one final goal on the power play as Chris Butler let the shot go from the right circle for his second of the season. In his first start back with the Stars, Colton Point earned the win with 21 saves while Binnington was saddled with the loss after 15 stops. Husso made seven saves in relief.

Texas leads the head to head with San Antonio 3-2-0-0 this season and will begin another three in three next weekend with stops in Milwaukee, Grand Rapids, and Chicago.

The Texas Stars are the primary development affiliate of the NHL’s Dallas Stars, will return to the H-E-B Center on Wednesday, Dec. 5 at 7:00 p.m. after traveling to Milwaukee, Grand Rapids, and Chicago next weekend.